The honor guard known as the Dusk Patrol has the responsibility of touring every mile of the pit throughout the year. They honor the setting of the sun and the Twilight of the Gods at the end of the day from a different station every night.
— Instructor of Recruits

I served on the Dusk Patrol at the end of my time as a grunt. The Captain's solid. A good commander and tough as nails.
— Sgt. Kill Flayer

The Ceremony of Dusk

Captain Shange a Knight of The Order of Tridensers leads the Dusk Patrol to a different spot on The Kirinal Pit every night. They salute the sun as it sets in the Ceremony of Dusk at a point every quarter mile on the Pit. They honor the Withdrawn Gods in general and the God of Justice Anam in particular.

The Patrol performs this ceremony every night, even when there is an invasion or battle happening on the Pit. They have been known to form a perimeter during an invasion, perform the ceremony, and then enter the fight once they were done. Some wonder at the importance of the ceremony, but the sameness of their task and their movement every day keeps them from scrutiny.

Sir Bekezela Shange is the current bearer of the Ruby Tridenser, one of the kingswords of Lozar. In another time, he would be eligible to be King of the nation, but Lozar no longer has one.

Instead, Sir Bekezela is the secret father of the Soulforged. The Tridenser is enchanted to look like a sword of simple steel, but the ceremony he performs every night pulls a dead soul from the Pit and transfers it to the Soul Transmitter in the Citadel of Anam where another of the Tridensers is hidden. The soul is relayed one more time to the Soul Forge and a third Tridenser in the Chamber of Rebirth implants the soul into that day's reborn soulforged.

Without this process, the Dead of Kirinal could not be reborn and the soulforged would not exist. Sir Bekezela takes his charge seriously, but he does sometimes fail to perform the ceremony in times of extreme peril. On those occasions, instead of a soul from the Pit, the clerics of Anam pull an undead soul from the Ghost Vault for rebirth. 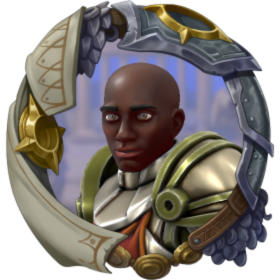 A 30-mile wide hole in reality ringed by fortresses and armies.

Days of the Week

Every day a new plane manifests in the Kirinal Pit.

Knight of the Order of Tridensers

Answering: "Write about an unassuming character who secretly controls things from behind the scenes."
Visit kitoypoy's Competition Page Check all other answers to this prompt Competition Homepage